This website or its third-party tools use cookies which are necessary to its functioning and required to improve your experience. By clicking the consent button, you agree to allow the site to use, collect and/or store cookies.
I accept
You are here: Home / Places in Moray / Sueno’s Stone – Highlight of the Pictish Coast

David Sellar describes Sueno’s Stone as “one of the most intriguing monuments in Scotland”.

He cites Joseph Anderson’s description with gentle mockery (it shows “pardonable exaggeration”, according to Sellar).

In Anderson’s words it’s ‘a unique monument, the most interesting and inexplicable of its kind in existence, either in this country or any other’.

It is visible from the A96, as it bypasses Forres, but blink and you will miss it.

Instead, from the eastmost roundabout on the A96 giving access to the town, make your way along Victoria Road (B9011) and turn right into Findhorn Road. This is a dead end and has you almost completely doubling-back on your westerly direction along Victoria Road.

There is no official car park for Sueno’s Stone but the on-street parking should be fine. And entry to this Historic Scotland visitor attraction is free.

Weighing over 7 tons and standing 6.5m (21 feet) in height, it is an imposing, decorated Pictish stone.

Carved in the 9th or 10th Century from local sandstone, it is an artistic masterpiece and seems almost impossibly enormous for its age and relatively slender design.

It is Scotland’s tallest surviving cross-slab and one of the most richly-carved examples of Pictish art in the country.

What the artwork commemorates is still the subject of discussion and unlikely ever to be definitively settled.

It seems to tell a tale of warlike slaughter.

On the front side, there is a ring-head Christian cross. It takes up most of that face of the stone. Its shaft, base and background are infilled with interlaced “celtic knotwork” decoration. 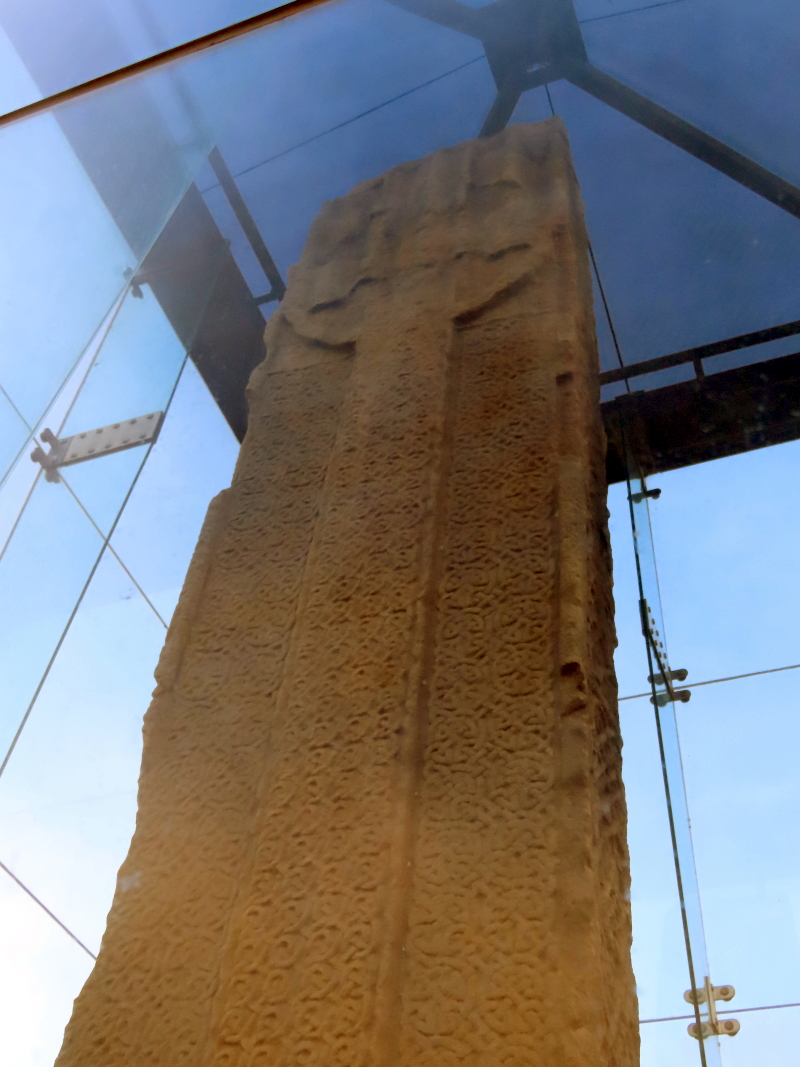 But it’s the abundance of motifs on the back which is most striking.

Across 4 separate panels, densely-packed, almost geometrically abstract-looking groups of figures ride into battle. They strike each other on the head with swords. Some appear to be beheaded corpses. 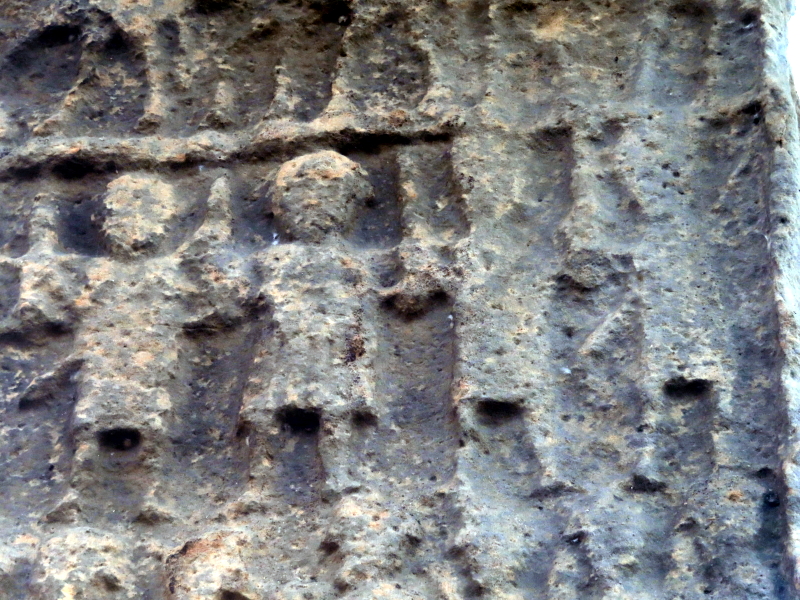 We have a number of possible options for the “true story” of Sueno’s Stone.

In the 10th Century, for example, when Scotland consisted of several different Kingdoms, Dubh (anglicised as Duff but meaning black or dark in modern Gaelic) was King of Alba (King of the Scots) from 962 to 967.

Dubh was reportedly murdered at Forres in about 967 as the result of an internal dispute among the Scots. Sueno’s Stone may be a monument to Dubh, erected by his brother.

Another possible version is linked to the man apparently known as “Sueno” – King Sweyn Forkbeard (King of Denmark from 986 to 1014) – and a battle between his Viking forces and the Scots. Because Sueno’s Stone displays mainly battle scenes, this would fit with the theory that the Picts must have had conflicts with the Vikings.

A further possibility – if the battle scene represented is one we know took place – is that it could depict a victory of Kenneth MacAlpin (who ruled from 843 to 859) or of his successor, Donald I (860-863). Their reigns strengthened the House of Alpin’s hold on this part of Scotland. In that case, the inauguration scene could refer to the enthronement of either of these important kings.

There is evidence to suggest that the stone fell or was toppled at some point around the 17th Century.

It was uncovered again within a century or so – in 1726 – and re-erected nearby. It was at this time that the name “Sueno’s Stone” was invented.

In the early 1990s, the stone was encased in reinforced glass to minimise further erosion.

Join our Newsletter for a weekly Moray update.

Delivered straight to your inbox. (See the sign-up form below).